I went on another of my infamous Sunday afternoon drives through the country today—a mere 520 miles in eight hours and forty-five minutes (driving time; 12 hours total time).

Red Rock Canyon State Recreation Area (near Cantil, California, not the Red Rock Canyon outside of Las Vegas, Nevada) caught my attention on my last trip to the Eastern Sierra in November. I just didn’t have time to check it out on my way to or from Lone Pine.

I wanted to get to the area in the late afternoon in hopes of having good light on the colorful rocks, so I dallied a little along the way, first stopping at Portillo’s for lunch in Moreno Valley, and then checking out the location of a facility in Riverside where I have a meeting at in April.

I arrived at the park a bit later than I wanted to, and really didn’t have any time to explore the area for some killer compositions. I drove through the campground and snapped the photos below along the entrance road. There were a number of dirt/sand roads that are probably worth exploring on a return trip, but perhaps in my four-wheel drive pickup truck instead of my car.

From a photography perspective, being there for sunrise may be the better alternative given the layout of the cliffs. It could still be a challenge to get decent exposures, however, as many of the cliff faces are simultaneously in both direct sunlight and shadow.

For my return trip back to San Diego, I opted to take California Highway 14 to Interstate 5 through Los Angeles. I was pretty pleased—it was only an hour and fifteen minutes to drive the 70 miles from CA 14 to the I-405/I-5 merge in Irvine. Through the heart of L.A. Not too shabby! I’ve spent over four hours in traffic trying to get across L.A. on previous trips.

So here are my hastily taken recon shots of Red Rock Canyon State Recreation Area. On a fun side note, it was interesting that the dozens of vertical eroded rock formations between the layers reminded me immediately of the dozens of statues carved over the doors to Notre Dame cathedral in Paris. 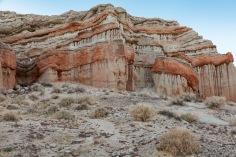 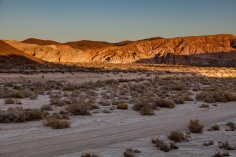 For grins and giggles, here are the statues at Notre Dame:

This site uses Akismet to reduce spam. Learn how your comment data is processed.