My trip to the Alabama Hills last month really inspired me, so I decided to return for the three-day Veterans Day weekend. It was a short trip, but a rewarding one.

Saturday’s sunrise wasn’t as spectacular as the one for my trip in October, but decent nonetheless. I also took a little detour up Whitney Portal Road to Whitney Portal—at about 8,400 feet / 2.560 meters—and enjoyed a chilly morning amongst the pines and some sheer granite cliffs. Spray from a cascading creek froze into icicles on fallen branches in the cold mountain air.

You’ll see one photo that’s my attempt to replicate the famous Ansel Adams photograph, Winter Sunrise, Sierra Nevada from Lone Pine, taken in 1944. I found it amazing that 73 years later, I could stand within 100 yards of where he likely took the photo, and it appeared pretty much the same. There were no houses, strip malls, or other development in the intervening years to interfere with the shot. Think about that for a minute. Pretty amazing. (Getting to the exact spot where he likely took the photo would have required navigating through a couple of barbed wire fences. No thanks.)

I never tried doing a panorama shot before, so I tried during Saturday’s sunrise. I’ll do better at leveling the camera next time, but I’m pleased for a first attempt. 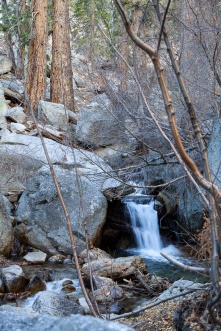 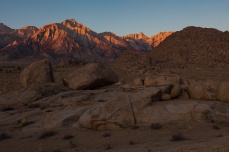 3 thoughts on “Lone Pine and the Alabama Hills”

This site uses Akismet to reduce spam. Learn how your comment data is processed.